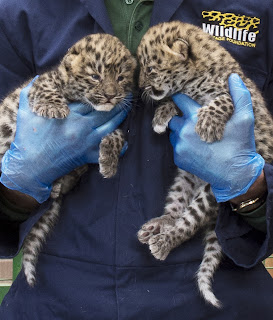 The Wildlife Heritage Foundation in Kent has just announced the birth of two Amur leopard cubs - the rarest big cat on the planet. After a 90 day pregnancy two cubs were born on the morning of the 22nd May.

WHF aim to prevent the Amur leopards going the way of the Tasmanian Tiger by running a managed breeding program that should eventually lead to the grandchildren of these cubs being reintroduced into the wild.

The Amur leopard (aka Far East leopard, Manchurian leopard, Korean leopard) is a rare leopard subspecies living in the temperate forests and harsh winters of the Russian Far East. They are facing extinction because of unsustainable logging, forest fires, land conversion for farming and poaching for the illegal trade of their unique spotted coats.

It is a critically endangered sub-species on the IUCN's 2000 Red List of Threatened Species and CITES has listed it on Appendix I. There may be a mere 30-35 left in the wild and only around 100 in captivity.

The Wildlife Heritage Foundation have been actively involved in many breeding programs over the past 10 years, helping to raise funds for conservation projects all over the world. Previously the charity has raised money for leopard conservation chairty Amur ALTA, Wildlife Vets International, and Project Life Lion in Africa.

The WHF is based at The Big Cat Sanctuary in Smarden, Kent, where they house a small number of selected endangered big cats with the view to breeding and where possible re-introduction to their home continents. The WHF is a charity allowing people from all walks of life, nationalities and countries to join and actually assist (if they wish) in the long term care, and where possible reintroduce animals and plants in to their native habitat.

The WHF is supported by its sister site Paradise Wildlife Park -http://www.pwpark.com
Posted by Peter at 04:51 1 comment: