A random photograph of a crab posted by a tourist on Facebook has resulted in the rediscovery of a species. 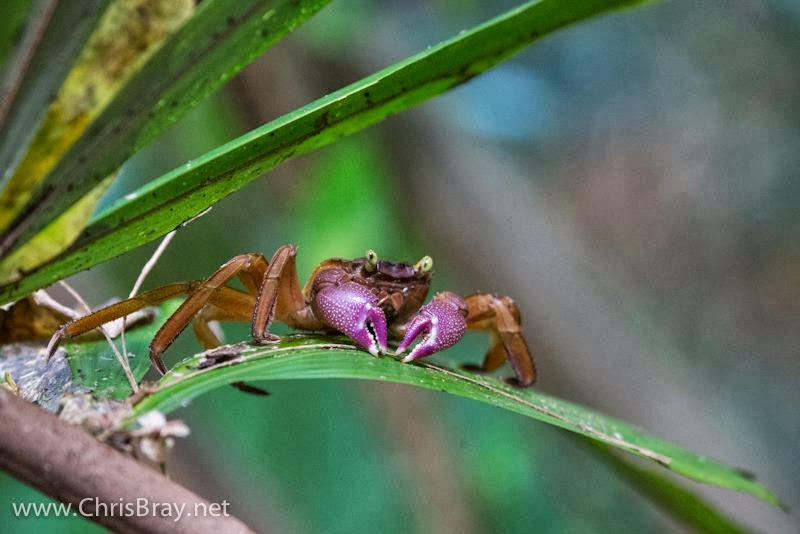 “Imagine my surprise at coming eye-to-eye with a critter in cyber-space that eluded me for over twenty-years on the ground,” exclaims Max Orchard, a veteran ranger of Christmas Island National Park when he noticed a striking photograph of the rare White-tripe crab staring back at him from the Christmas Island Tourism Association’s page last week.

The photograph of a medium-sized, purple-coloured crab scurrying amongst forest foliage near the island’s remote Dolly Beach was snapped earlier this year by tourist Chris Bray, and subsequently posted on the island’s tourism Facebook page.

Both Bray and the island’s tourism authorities were blissfully unaware of the significance of the photo until Orchard logged onto the site last week.

“It was only on a whim that I checked the Facebook page,” says Orchard, who in over twenty years of fieldwork on the Australian island located 2 600km north-west of Perth, only once caught a fleeting glimpse of the mysterious crab. “I remember vividly - two bright yellow eyes looking at me around a tree trunk in the middle of a rainstorm, but unfortunately I didn’t have my camera with me,” laments Orchard.

“The last known specimen was collected in 1989 and it hasn’t been photographed since,” says Orchard, a leading authority on the island’s crabs, having earlier this year published the encyclopaedic “Crabs of Christmas Island” which chronicles the island’s 33 eye-popping crabs, some as big as coconuts.
Bray, a keen photographer, is cock-a-hoop with his discovery. “It was a series of chance events really. Firstly, that I paused to snap the photo of a random crab, secondly that I decided to send it to the island’s tourism Facebook page and finally that Max Orchard, one of a handful of people in the world who would recognise it, just happened to see it,” remarks Bray.

On noticing the Facebook image, Orchard immediately alerted two of the world’s pre-eminent carcinologists [scientists who study crustaceans], Professor Peter Ng of the Raffles Museum of Biological Research in Singapore and Dr Peter Davie of the Queensland Museum. “Both have now confirmed that the critter is in fact the elusive White-Stripe crab (Labuanium vitatum)” exclaims a jubilant Orchard.

“Christmas Island provides critical habitat for the most diverse and abundant land crab fauna on earth. This exciting find reinforces the conservation significance of the island’s biodiversity – it is great news,” declares Mike Misso, Manager of Christmas Island National Park, a spectacular spread of jungle, cliffs, pinnacle fields and beaches which covers over two-thirds of the island.

But the rediscovery of the medium sized crab with a carapace up to 40 mm wide, hasn’t only sent park rangers and scientists in a flap, many of the tropical island’s 1500 residents, many of whom are reliant upon a growing eco-tourism market are abuzz with the news.

“How many places in the world can you go for a holiday, and make a discovery like this,” says Karen Singer, Manager of the Christmas Island Tourism Association, adding, “It’s the sort of stuff, dreams are made of.”
Bray turned to his own Facebook page to boast of his find.

“It was apparently feared this beautiful and elusive little crab may have become extinct…and now the world’s most eminent carcinologists are extremely happy at the find and are looking to get this critter listed as critically endangered under the ICUN red list… How amazing is that!”
Posted by Peter at 04:20