Oulanka and Paanajärvi were certified PAN (Protected Area Networks) Parks, but artificially divided by the country border between Finland and Russia. After a decade of working hard to harmonise the two areas management plans, the third-party verification conducted by PAN Parks’ experts confirms that natural values of the two areas are taken care by the two management bodies in close cooperation.

Home to some of Europe’s rarest creatures - bear, wild reindeer, lynx, wolf and wolverine this collaborative approach will aid their survival. 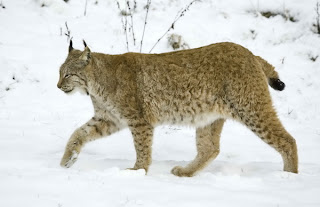 Photo: Andy Gehrig
The trans-boundary status of the area is the largest protected area within the European Wilderness Preservation System set up through the PAN Parks’ network. The two parks cover over 132,000 hectares, from which 103,000 hectares are managed according to wilderness principles. ‘These principles mean there is no extractive use within the wilderness zone! No hunting, no logging, no grazing with domestic animals, but nature developing on its own!’ explains Vlado Vancura, conservation director of PAN Parks Foundation.

Find out more about PAN Parks
Posted by Peter at 08:35